How does copper become a perfect decorative metal roofing mesh 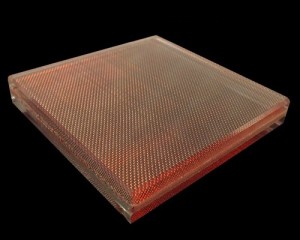 Decorative mesh screen for roofing is exposed to various elements over the time. If this screen is made of a durable material, it produces a security layer that can redevelop when damaged. It ensures highly reliable performance while offering resistance to corrosion in any atmospheric conditions. Copper mesh decorative metal panels for roofing can withstand undesirable corrosion. As a result, it is invariably the supporting substrate which ultimately offers life for over 700 years. It cannot be achieved from other materials such as stainless steels.

The formation of security layer on copper is a complicated process, including the development of cooper oxide films, which gradually interspersed over years with cuperous and cupric sulfide conversion films and interacting with conversion of sulfide layers to green copper sulfate layer. The corrosion rate of this metal after oxidation is decreased to 0.0001 to 0.0003 mm in a year. The service life of copper roofing hence can be considered to about 200 years. Thus, it has a significant effect on comparative whole life evaluations considering energy consumption, carbon dioxide production and cost.

With the passage of time, issues occurs of feasible effects of rainwater on copper, specifically in areas where copper is used on roofs, cladding, gutters etc. These issues are usually fuelled by lab tests, involving large magnitudes not found in the actual conditions. Various studies have been conducted to evaluate the complicated processes occurring during the rainwater interaction with copper. It is found that copper roofing are fully safe for use. It is already known that copper is an essential element to life however most chemicals and elements become toxic at some concentrations. Nominal magnitudes of copper material are taken in rainwater run-off.

Binding to organic matter by adsorption to particles, and precipitation copper eventually comes to rest in a mineral form as a part of the natural copper material of earth following the mineralization cycle. When exposed to soil, the remaining copper is consumed by the organic matter in soil or at sewage processing plants or by other chemicals. It produces compounds with nominal and eventually connecting the natural background presence of copper in aquatic conditions. For example dissolved copper levels in lakes, it is seen that levels reduce by even 80% hence to natural background levels, despite the wide use of copper on buildings in the external areas. Copper is overall a safe metal for use in buildings which encourages its applications in plumbing in homes across the earth.

Copper maintains its properties reliably and shows a clear superior performance to other materials. It can withstand all temperatures and is ideally perfect for mechanization methods including performing of trays and joints in safe areas and the its use in automatic seaming machines on roofs, decreasing extensive work. Copper is widely used as roofing material and can be easily formed to suit virtually any dimensions. The thin copper mesh has the potential withstand extreme conditions and offers designers the real freedom and almost no limitations on the roof structure. Contact Heanjia for more information on decorative mesh made from copper for your applications.