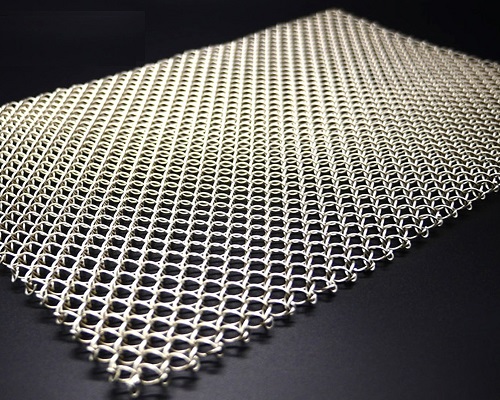 Metallic energy absorption components are intended to absorb energy in different manners, based on the type of the applied loads, axial compression, bending duration, shear loads, tensile forces and together all of these. A stable performance throughout the whole deformation process is anticipated, although this is based mainly on geometrical factors like length and cross-section and on material properties.

Expanded metal mesh screens are produced upon in-line expansion of partially slit metal sheets, producing a mesh with holes, produced by strands and bonds, a geometric configuration that may be exploited for energy absorption. The influence of annealing on mechanical performance of expanded metal sheets is observed. The outcomes show that flattened screens can absorb more energy than the standard components. Besides, it is found that standard meshes are more prone to the heat processing as compare to expanded metals.

The decorative mesh panels for energy absorption are commonly made of expanded metals due to their high sturdiness and efficient performance.

Expanded metal has been commonly used for several years, as a result, several possible applications for expanded metals can be seen around. These applications can be categorized as: furniture, construction and energy absorbing components. In manufacturing process of expanded metals, the material is slit and stretched to improve the mechanical properties of the base metal, improving its strength. Besides, the material’s weight is also reduced making the sheet lightweight.

Expanded metal sheets are usually produced in two types” standard expanded metal and flattened expanded metal. These sheets are fully different from each other in terms of their geometry and mechanical properties. The flattened sheet received additional cold processing during which the standard sheet flows through a cold roll reducing mill.

Considering the energy absorption applications, metallic energy absorbers degrade in different ways when they are received axial compressive loads. On the other hand, energy absorbers made of composite matrix cannot perform adequately due to a combined mechanism featured by yielding and fracture.

The flattened expanded sheets are used as core replacements for honeycombs in sandwich panel structures. These trusses were evaluated in shear and through- thickness compression, the outcomes showed enhancements in degrade strength of these materials. A range of studies were conducted to determine their energy absorption capacity to absorb seismic energy in reinforced concrete. It is found that collapse mechanism is based on orientation of expanded metal cells. The energy absorption potential of the expanded metal screen can be improved by using flattened expanded sheets.